Penetration testing is the activity of conducting security testing with the aim of identifying and exploiting vulnerabilities to identify strengths and weaknesses. I include strengths because I believe it’s important for security testing to promote both positive and negative findings. I also think that there is a huge mis conception with what penetration is, what it helps with and how to best get value from a penetration test.

My definition isn’t too far from the NCSC one: https://www.ncsc.gov.uk/information/check-penetration-testing

When looking at a system a penetration test is not usually the most efficient starting point, especially if it’s from a black box perspective. END_OF_DOCUMENT_TOKEN_TO_BE_REPLACED

I’ve been working with technology and its security for a while, I have travelled to different parts of the world, I’ve worked with major organisations, and I’ve worked with a whole range of organisations both from strategic advisory and at the coal face perspective. Now over the last twenty years I thought about how much has changed… and honestly, I don’t think much has.

Technology innovation, miniaturisation and adoption rates are through the roof, but I still see massively similar patterns. I’m not going to try and quote statistics, but I think it’s a fair to say the threat landscape has changed somewhat (for the worse!)

Back in the 2000s era we had networks running Windows 2000 and Windows Server 2000/2003, we had clients with open services which could largely be accessed from anywhere on the network. We had host-based firewalls from third party vendors, but these were rarely implemented, MSBlaster and Windows XP changed this dynamic somewhat, to say things haven’t improved on one front would be a lie, however the level of crime and access to technology globally has changed massively. END_OF_DOCUMENT_TOKEN_TO_BE_REPLACED

Why are ransomware attacks so devastating? – Part 1

Despite a multi-billion-dollar cyber security industry, it seems daily that organisations are succumbing to “cyber-attacks” which commonly include ransomware. Why are they successful and why are they so impactful? Well, let’s take a look! END_OF_DOCUMENT_TOKEN_TO_BE_REPLACED

Ok this assumes you know how to get the NTDS.DIT and SYSTEM registry hive out from a domain controller, if you don’t go looking, we might have blogged a few ways to do that! Now then, firstly, let’s Install DSInternals. From PowerShell 5 onwards you can simply run:

You will likely need to set your execution policy:

Now to dump the hashes we use: END_OF_DOCUMENT_TOKEN_TO_BE_REPLACED

We can enumerate active directory to find accounts that do not require pre-authentication. There’s a simple way of doing this using Rubeus:

We can see there is a vulnerable account that has Kerberos Pre-Authentication disabled. 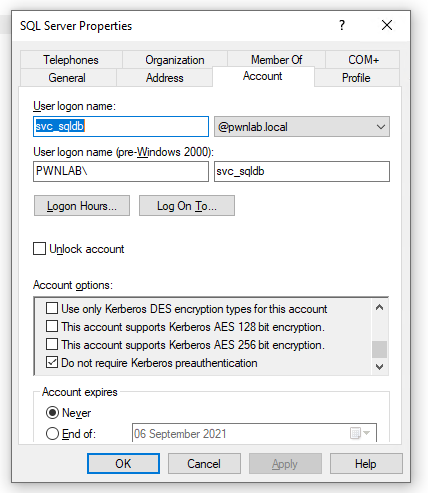 Executing/Creating a process via WMI Methods

WMI is an awesome technology capability for Windows administration, I’ve been using WMI since the Windows 2000 era, I’ve written WMI based scripts/tools to defeat malware, yay, however with any tool the use can be for good and for evil!

This post is going to focus on Win32_Process:Create (there are other methods as well!) END_OF_DOCUMENT_TOKEN_TO_BE_REPLACED

Changing a security posture requires changing your own behaviours

I’m sure you will have had a marketing firm or some random sales person on Linkedin tell you that security should be simple and that their product will save you from all the ATPs and nation state hax0rs under the sun. However let’s get real, thats almost certainly not true and also security isnt simple or we’d all be out of jobs and everyon woulndn’t be getting owned all the time.

END_OF_DOCUMENT_TOKEN_TO_BE_REPLACED

In Part 1 (Initial Access Defence and Checklist) we looked at ways of hardening your attack surface to defend against initial access. When it comes to ransomware there is a range of elements and variables in the kill chain that need to be successful for the outcomes to be achieved by the criminals. Here we are going to move further into the kill chain to look at further defences. Remember you need to have an “Assume Breach” mindset if you are going to be able to defend against ransomware, that being said, there is a hell of a lot of things you can do for 0 to low investment costs that provide a great ROI. Now some of this is going to be repeated guidance from part 1, that’s ok repetition is good (make sure you are covered from multiple perspectives). Ok let us get to it! END_OF_DOCUMENT_TOKEN_TO_BE_REPLACED

We looked after about 3-3500 endpoint devices. We were running Windows servers/clients and we leveraged technologies such as:

END_OF_DOCUMENT_TOKEN_TO_BE_REPLACED

We keep seeing organization get hit, in some kind of a sick way I think me and some of my friends in the industry are bored with the over dramatic responses of “sophisticated” “advanced” and “unpreventable” because most times the kill chains simply are not like this. But still the onslaught keeps coming. Well I know this much, whilst I would love to deploy with the team and harden everyone’s networks that simply isn’t possible. So what we thought we would do is write something to try and spread the knowledge a bit further and hopefully have some positive impact.

It’s not just that your data will be encrypted, it will likely be exfiltrated and sold. You will likely have access sold, data sold and be extorted. The Ransomware business model is adapting to defender responses. Even if you can restore from backup they will likely try and attempt to extort. This brings a key point in this equation, the best position is to NOT get pwn3d to start with. Ok that might sound silly to say but when we look at these kill chains you might start to see the world from my perspective a little. END_OF_DOCUMENT_TOKEN_TO_BE_REPLACED

No comments to show.